President Biden’s March 9, 2022 Executive Order asserts that technological advances and the rapid growth of crypto markets “necessitate an evaluation and alignment of the United States Government approach to digital assets.” The order mandates multiple reports and studies, and it tasks an alphabet soup of government agencies with responsibility for the effort. Our client update summarizes the reports, responsibilities and timelines contemplated by the order in one neat visual.

The order tasks an alphabet soup of government agencies with responsibility for the effort, which will be led directly out of the White House. Thirteen of 23 Cabinet departments (including Treasury, Justice, State and Homeland Security), all major financial services regulators, several science and technology offices, economic and policy officials, the intelligence community and the EPA will all play a role.

Definition of “digital asset”
The order defines “digital asset” to include all CBDCs (central bank digital currencies) “regardless of the technology used,” and all “other representations of value, financial assets and instruments, or claims that are used to make payments or investments, or to transmit or exchange funds or the equivalent thereof, that are issued or represented in digital form through the use of distributed ledger technology.” While the definition appears to focus on financial services applications, it is unclear whether it is also meant to pick up other parts of the cryptoverse.

Role of financial services regulators
A key takeaway from the order is that the Administration is not handing over responsibility for national crypto policy to the banking, securities and other financial services regulators. By giving a seat at the table to agencies such as the State Department, the Domestic Policy Council, the Council of Economic Advisers, the Office of Science and Technology Policy, the Office of Information and Regulatory Affairs and the National Science Foundation, the order signals a point of view that the potential impact of crypto technology on the U.S. economy, national security and global leadership indicates that legacy regulatory structures need to be revisited within a broader frame of reference.  Indeed, the Assistant to the President for National Security Affairs and the Assistant to the President for Economic Policy are responsible for coordinating the work for the executive agencies required by the order.

Spotlight on CBDCs
The Administration “places the highest urgency on research and development efforts into the potential design and deployment” of a U.S. CBDC. This is a clear statement of support from the Administration and a change in tone from previous Federal Reserve commentary which we believe is designed to accelerate the Federal Reserve’s ongoing work on CBDC design and technological research (more background here). Workstreams specific to CBDCs include a report on potential design choices and implications; U.S. participation in international efforts and pilot projects; a strategic plan for potential implementation and launch from the Federal Reserve; and a proposal for dollar CBDC legislation to be developed by the Attorney General in consultation with Treasury and the Federal Reserve.

The following chart summarizes the reports, responsibilities and timelines contemplated by the order (click to download the PDF). 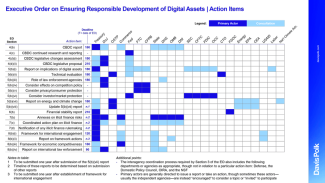 Brendan Costello contributed to this update. He is admitted only in New York, and is practicing in DC under supervision of a partner of the firm.

If you have any questions regarding the matters covered in this publication, please reach out to any of the lawyers listed below or your usual Davis Polk contact.

+1 202 962 7136
zachary.zweihorn@davispolk.com
This communication, which we believe may be of interest to our clients and friends of the firm, is for general information only. It is not a full analysis of the matters presented and should not be relied upon as legal advice. This may be considered attorney advertising in some jurisdictions. Please refer to the firm's privacy notice for further details.
Copy link to share post
linkedintwitteremailpdf