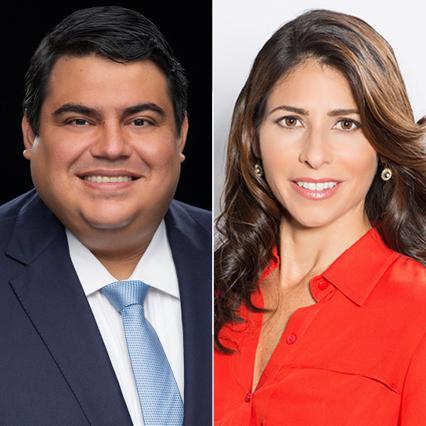 Read on to learn more about Tania's and Pedro's careers, including their experience as Hispanic lawyers.

The two of you recently worked together on a transaction where Davis Polk represented Cisneros. Tell us about that experience.

TD: When I called Joey Hall last year to ask if Davis Polk would represent Cisneros in a special purpose acquisition company (SPAC) we were co-sponsoring, I was delighted to learn that Pedro and Maurice Blanco would be the partners on our project. Because I had very little experience with SPACs, I was frequently emailing Pedro with questions and issues. I appreciated that Pedro was always accessible and responsive, no matter the issue. He has an extensive knowledge of securities laws and capital markets, which was key in helping us navigate a number of tricky sponsor issues and challenging market conditions. As a client, I love working with Davis Polk not only because I know I will get outstanding legal and business advice, but also because Davis Polk really does have the nicest lawyers and culture.
PB: Working with Davis Polk alums is always great, and that was especially so with Tania. As we all know, the firm truly has a collegial culture and our alums are a cornerstone of that, so that makes the experience enjoyable on a personal level, even when transactions are complicated or difficult. Tania is a remarkable lawyer, knowledgeable about the issues we face in capital markets transactions, and a pleasure to work with.

Tania, how has your Davis Polk experience been useful to you in your role at Cisneros?

TD: One of my primary responsibilities at Cisneros is overseeing the due diligence, negotiation and execution of the company’s cross-border investments and joint ventures. As a corporate associate in the Latin America practice group at Davis Polk, I learned how to successfully manage complex transactions involving multiple work streams and foreign jurisdictions – skills that are invaluable in my current role managing teams in different locations. I also attribute my strong contract drafting and negotiation skills to the long hours I spent learning from partners like Brad Smith and Jim Florack during my rotation in the Finance group. I rely on these skills regularly to clearly allocate risks and reflect business objectives in our commercial agreements.

Pedro, you were named a “Rising Star” in capital markets by Law360 this year. What does this honor mean to you? What else do you consider your career highlights?

PB: It is an honor to be recognized, but this is more of a recognition of the great work we do in the Capital Markets group at the firm. The best part about being named a “Rising Star” has been the opportunity to reconnect with people who see the news and reach out, including many former Davis Polk colleagues. It is easy to forget how large the Davis Polk alumni community is, and it can take news like this to remind you. Broadly speaking, the greatest thing about my career has been the ability to learn from others at the firm. We practice with the best practitioners in their fields at all levels, from the most senior partner to first-year associates, and the ability to work with them has made me a better lawyer.

TD: I was fortunate to have many mentors during my time at Davis Polk, but if I have to pick one individual, it would be Andres Gil (with whom I share Cuban heritage). Andres actively recruited me to Davis Polk and to the Latin America team he was building with the support of others at the firm, including Joey Hall, Nick Kronfeld and Michael Willisch. At that time, Latin America was the new frontier, as a wave of Latin American companies looked to access U.S. capital markets, and I was excited for the opportunity to use my Spanish language skills in my practice. On a professional level, Andres made sure I was exposed to a diverse set of corporate transactions and clients, and he taught me to be sensitive to the cultural issues that can arise when working internationally. Even after I left the firm, Andres continued to be a valuable mentor and resource, and he remains a close friend today.
As for a favorite memory, I was part of the Davis Polk team that worked on the privatization of Telebras, the Brazilian telephone company that was separated into 12 companies in 1998. Most of us on the team didn’t speak a word of Portuguese, so we conducted our management due diligence meetings and drafting sessions in our best “Portuñol” (and somehow that worked). We had a tremendous amount of fun that summer traveling all over Brazil and taking official breaks from our meetings to watch the Brazilian team play in the World Cup. Looking back, I think the Telebras transaction may have been the deal that gave Davis Polk a foothold in the Brazil market. Just ask Manuel Garciadiaz – he too was an associate on the legendary Telebras team.

Pedro, tell us about your experience serving as a member of the firm’s H/LA Affinity Group’s Steering Committee and the DEI Committee and about working as a Hispanic lawyer.

PB: Being a member of H/LA and now a member of the firm’s DEI Committee have been great experiences. H/LA provides an opportunity to connect with lawyers from diverse backgrounds as it serves as an umbrella group for people from many different backgrounds and cultures. And as a member of the DEI Committee, I can be part of the great work we are doing to make Davis Polk an enriching workplace for everyone.
As a lawyer, being a fluent Spanish speaker has provided an obvious advantage of allowing me to diversify my practice into Latin America, but beyond that, I have not felt that my experience as a Hispanic lawyer has been different from that of any other lawyer at the firm. I think that is one of the great things about the firm. We celebrate diversity, including by highlighting cultural differences through the work of the affinity groups, but when it comes to work, we give all lawyers the same opportunities such that I was never made to feel like an “other.”

Tania, what does National Hispanic Heritage Month mean to you?

TD: National Hispanic Heritage Month is about celebrating the common language, warm culture and family-oriented values that unite Hispanics, while also acknowledging the richness and diversity of Hispanic culture and experiences. To celebrate, I plan to visit some of my favorite Hispanic venues in Miami – Café La Trova in Little Havana for live Latin music, the Tower Theater for a Spanish-language movie, and Versailles for a late-night cafecito. And in a tribute to my own Cuban background, I will be hosting an evening of dominos (a pastime we rediscovered during the pandemic) and mojitos for family and close friends.